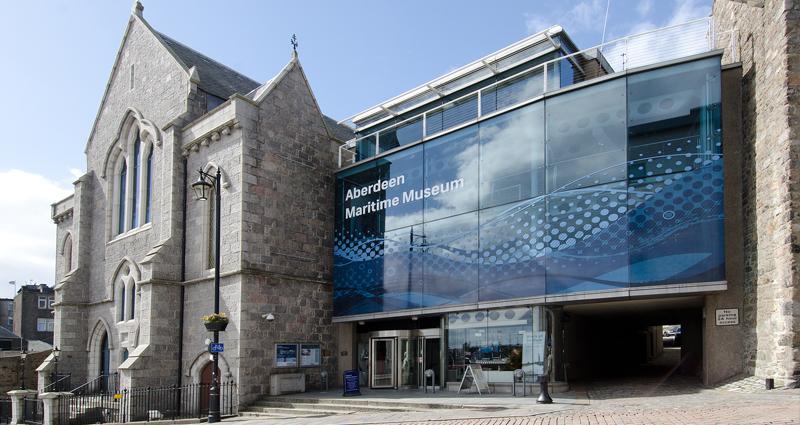 Aberdeen Maritime Museum is a maritime museum in Aberdeen, Scotland.

From the early days of trading, fishing, and shipbuilding in Aberdeen to the discovery of North Sea oil and gas, and Aberdeen’s current position as a global leader in energy transition, the Aberdeen Maritime Museum tells the story of the city’s long and often dramatic relationship with the sea.
Collections.

This interesting narrative is told through the interesting objects in the contemporary, fully accessible museum and 16th century Provost Ross’s House. A full lighthouse lens assembly, antique harpoons, scrimshaw, and models of vintage ships from 1689 to the present day are among the highlights of the exhibit.

From the 19th to the 20th century, Aberdeen produced nearly 3,000 ships. Through model, drawings, and photographs, the story of the tea clipper “Thermopylae” and one of the Japanese navy’s first modern battleships, the “Jho Sho Maru,” is told.

In Aberdeen, volunteers have been researching and documenting the history of over 3,000 registered boats since 2004. Their sources include shipbuilders’ yard lists, Lloyd’s Register of Shipping, and the memories of local individuals involved with Aberdeen’s shipyards. Visit www.aberdeenships.com for more information.

Enjoy spectacular views of Aberdeen Harbour from the top floor, which is home to the UK’s oldest company, with an almost 900-year history. Discover the history of Aberdeen Harbour via artefacts from the 13th to the 21st centuries that show the city’s global commercial connections.

Throughout the 19th and 20th centuries, Aberdeen thrived as a major fishing port. The city built the ships and supplied the sailors as well as the employees who processed the fish caught at the fish market. Aberdeen’s Fishing Memorial (unveiled in 2018) is located outside the Museum on Shiprow and honours the significant contribution that fishing and fishing people have made to the city.

Visit the Murchison platform model, which stands 9 metres tall and is the closest anyone can come to an offshore facility, to discover more about life offshore, how oil and gas are discovered, and how their exploitation works. A new exhibition, funded by the Friends of Aberdeen Archives, Gallery & Museums, will debut in late summer 2021 and will focus on energy, work, and people.